LoveFire.ca Radio had a lovely time live streaming the Still Vibrations 4 show held in Edmonton, Alberta Jan 21, 2012.  Desert Dwellers Amani Friend was there and the LoveFire Radio was able to meet and connect with the heart opening producer and visionary artist.

It was a great turn out, with incredible music and a steller tribe of beautiful dancing beings!  We can’t wait until next year for Still Vibrations 5 2012!

We’re working on getting the archive ready for you to enjoy, so stay tuned for a Still Vibrations 4 2012 mix, featuring Joy One with Cam Boyce and Desert Dwellers Amani Friend!

Still Vibrations, brought to you by Astral Harvest, Zodiac Series and InAHome Entertainment with sound by JoyOne Mobile Entertainment.

Haley Love dancing up some LoveFire!

Please join us on January 20th. at the Yellowhead Brewery as we proudly present Still Vibrations 4

Desert Dwellers has its roots in the Southern California dance collective known as Moontribe … and tribal dance rituals at magical locations deep within the vast expanse of the New Mexico, Mojave, and Black Rock Deserts. A longtime collaboration between electronic music pioneers Amani Friend & Treavor Moontribe, Desert Dwellers is a ‘virtual band’, using the internet as a collaborative space in which concept albums are created with cutting edge techniques that blend the modern edge of electronica with the ancient sounds of cultures past.
http://www.desertdwellers.org/index2.html

Tippy describes his music mostly as electro acoustic. Using found objects such as tin cans, beer cap rattles, bike horns, wrecked guitars, popcorn filled shampoo bottles, and clusters of car keys to put down the beats, he makes his music with instruments none of us would imagine using. But that is what makes him so profoundly unique, and so worth watching live. The icing on this live cake, is his four octave voice, his tongue, and his teeth, all amplified through a looping echo machine.
http://174.3.224.245/fmi/iwp/cgi?-db=TippyWeb&-loadframes

Sedated Bliss is a realm that these two brothers will have you travel too in order to progressivly stream this absolutely utter
unniversally psychedelic bright and whole sound that they have discovered in there own journeys throughout audio enlightenment. Mason and Dean Kemmer
shall be starting this vibe off sedating your mind, body, and soul, And throughout the set will have you blissfully dancing to the sounds
of progressive psychillout with some extra live action secretly added to the experiment. With Astral Harvest-Angelicas basket already under
these boy’s belts, and residenting the local Psychedelic trance night and more sets then we can count, We are confident these boys
are a master of there psychedelic craft.

Nineca comes from Spain. She composes in English, Spanish, Mallorquin (the native language of the island where she grew up. She usually composes on the guitar, the Djembe or in her head! One of Ninecas’ most attractive talents is her improv vocal composition which she uses in collaborating live with Djs, Bands, for jams, for acting and for composing. Nineca’s styles run mainly in the eclectic ‘world beat’, ‘traditional’ and ‘new wave electronic’. She loves to Host/MC and to Vocalize to all kinds of styles of Dj music from trance, dub, ambient, down tempo, hip hop, house, breaks, folk and funk… just to name a few.
Nineca works with a few people on a collaboration basis: TONONA is a Experimental Electrorgancoustic band, where Dylan G and Nineca play with electro sounds, live vocals and instrumentation. Also working with SHAMIK, LEO FX and John Armstrong from BRASS MONKEY PRODUCTIONS in the studio adding vocals.

Broadcasting live from Still Vibrations V 8-3am (?) Visit the website for streaming links for your favourite media player. 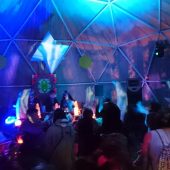